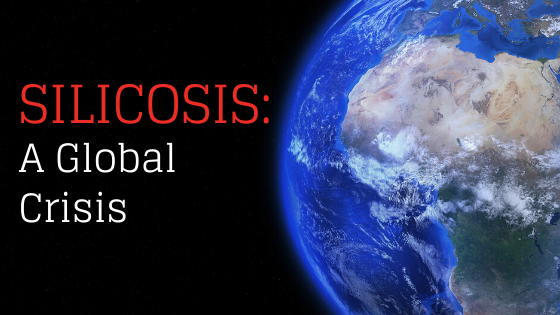 Silicosis is a global threat, with cases spanning countries and industries. While evidence of this disease has been around since ancient Egypt and Greece, the number of cases is only growing. Let’s dive into how significant of a problem silicosis truly is:

On September 23, 2017 the Occupational Safety and Health Administration (OSHA) began enforcing the permissible exposure limit (PEL) for respirable crystalline silica, making it five times lower than the previous standard. This was specifically for the construction industry, with general and maritime industry standard being enforced in June of 2018. OSHA is working on expanding new legislation for construction activities covered under Table 1, but there are other industries in which workers need more protection than is currently provided.

Black Lung disease has long been an occupational hazard in the mining industry, highlighted by the Hawk’s Nest Disaster in 1927 causing the deaths of over 2,000 men. 760 of these men died within five years of the work completed in two months. While there was a decline in the number of black lung cases after the horrific incident, there has once again been a rise in cases reported over the past two decades. The sheer size of the surface mining industry, which is double that of underground coal mines, contributes to the increase in black lung cases. Surface miners are exposed to significantly more quartz (a major source of silica) than coal miners are. Furthermore, the safety standards initially put in place in the mining industry only decreased worker’s exposure to coal dust, not silica dust. It is evident that proper standards need to be put in place to protect both surface and underground coal miners.

Only recently has the kitchen countertop industry emerged as a major contributor to the silicosis picture. Engineered stone with embedded quartz, which contains over 90% silica, has become the most used material in countertops over the past 10 years. Granite, which was previously the standard countertop material, contains less than 45% silica. As a result, cutters are being exposed to a substantially higher silica dust level, spiking the number of silicosis cases reported in the United States. Middle-aged workers, some as young as early thirties, are falling ill to silicosis and cannot perform basic daily functions.

Unfortunately, Australia is facing a major silicosis crisis that is escalating quickly. Particularly in the stonecutting industry, workers are falling ill at an unprecedented rate. One in five stonemasons are diagnosed with silicosis. In Queensland alone, 186 workers compensation claims have been filed as a result of silicosis developed as a stonemason, excluding unfiled cases. In New South Wales, there are already double the amount of silicosis cases in the past seven months compared to the whole previous year. The sudden rise of silicosis cases is a direct result of the introduction of engineered stone as a replacement to marble and granite, among other countertop materials.

To combat this hazard, the workplace exposure standard was cut to .05mg/m3 over an 8-hour workday (same as OSHA in the United States). However, workers are still developing silicosis at an alarming rate. The Victorian Labor Government is pushing to further cut the limit to .02mg/m3. While the implementation of new rules is promising, more action will be necessary to stop silicosis altogether.

Several industries in India are plagued by silicosis. Despite the industries differing, the same problems exist in each: inadequate testing and health check-ups paired with little to no engineering controls in place to suppress and stop respirable crystalline silica exposure. In ceramic factories, workers are exposed to unsafe conditions, with workers dying in their thirties and forties as a result. Migrant tribal farmers work in quartz factories where they are exposed to silica dust for up to 14 hours per day, six days per week.

Indian miners are also developing silicosis on the job without any protection. In Rajasthan alone, there are a reported 5,307 workers suffering from silicosis, with 250 deaths. Yet state human rights commission officials believe the actual number could be in “lakhs,” or hundred thousands. While this number is staggering, it is impossible to know the exact number without health check-ups readily available to workers. Even if these were in place, without proper engineering controls implemented this information does little. Ultimately, there is a lack of awareness about how to protect workers from silica exposure. Additionally, the absence of proper testing equipment further hinders doctors and officials from accurately gauging the number of affected people. However, it is clear that the number of silicosis sufferers in India is alarming and that proper engineering controls must be implemented to stop this silent killer.

The United Kingdom is placing a strong emphasis on silica dust hazard awareness and reducing workplace exposure. Over the summer, the “Dust Buster” campaign was launched by the Health and Safety Executive (HSE) to find out what measures had been implemented to protect workers’ lungs from respirable crystalline silica. Companies would post pictures on social media with #DustBuster and #WorkRight in the caption, showing what controls had been put in place to bring silica levels to an acceptable exposure. This awareness campaign is likely to be a trend that will spread to other countries as concern for the disease grows.

Gold miners in South Africa have suffered from silicosis and tuberculosis for decades. Just last week, a class action settlement revolving around those who developed silicosis while on the job became effective, providing compensation for those with the disease.

Silicosis is a universal threat and awareness is spreading across industries and across the globe. These cases illustrate that changes need to be implemented, followed, and taken seriously. Lives are at risk if measures are not taken. Silicosis is preventable yet incurable, so it is essential to stop it before it’s too late!

Do you have a water system to combat silica dust? Reduce respirable silica dust 100% with NeSilex, a specially formulated surfactant designed to chemically change water droplets. Instead of repelling the dust, the chemically charged droplets encapsulate and trap the dust, preventing it from becoming airborne in the first place.