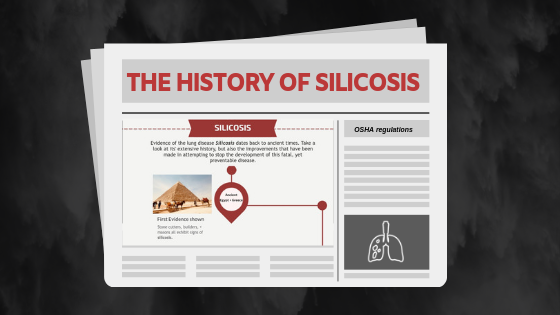 Silicosis is perhaps the most notorious of the variety of the diseases that result from silica exposure. It is important to fully understand just how constant a threat this fatal, yet preventable disease has been throughout the course of history.

Evidence of occupational silicosis dates all the way back to ancient Egypt and Greece.1 Stonecutters, builders, and masons all exhibited signs of silicosis, as they were the men who built these ancient cities.

In the year 1700, Dr. Bernardino Ramazzini, who is considered the “father of occupational medicine” identified evidence of silicosis. He did this by performing autopsies of the stone workers, noticing a “sand-like” substance in their lungs.2

In the early 1900s, Dr. Alice Hamilton found evidence of silicosis in granite workers in Vermont. The granite workers connected the dots that the dust they were inhaling on the job caused their extreme difficulty of breath and eventual death. Hamilton’s revolutionary work in this field helped shape safety and reform for laborers by the 1930s.2

The Hawk’s Nest disaster is a great example of how fatal over-exposure to silica dust can truly be. During the Great depression, a three-mile-long diversion tunnel was being dug through Gauley Mountain to reach the New River, in order to put in a hydroelectric power dam. The only dust control used was a two-hour period to let the dust settle after blasting through the rock. This resulted in the most publicized silicosis outbreak to date. Of the 1200 men who worked underground for only two months, 760 men died within five years, with 2000 men eventually dying as a result of the rapid onset massive silicosis.3

As a result of one of the worst industrial disasters in United States’ history, a federal campaign coined “Stop Silicosis” began in 1938. Francis Perkins, the Secretary of Labor at the time said “Our job is one of applying techniques and principles to every known silica dust hazard in American industry.”2 Unfortunately, this campaign was not effective, as the wrong practices were still in place to control for the amount of respirable silica. At his time there was a lack of understanding about silica dust.

Another federal campaign was started in 1996, called “It’s not Just Dust.” This Special Emphasis Program’s goal was to “reduce and eliminate the workplace incidence of silicosis from exposure to crystalline silica.”2 However, it was fifteen years (2011) before OSHA’s proposed guidelines made it to the Office of Management and Budget (OMB), under Executive Order 12866.4

It was not until 2013, after a group of congressmen sent a letter urging the OMB to “take prompt action” in regards to their rulemaking process on respirable crystalline silica, that it was listed on Osha’s regulatory agenda.4 On March 24, 2016, after even more public hearings, debates, and reviews, OSHA released their final rule on silica dust.4 This rule slashed the Permissible Exposure Limit (PEL) from 250 to 50 micrograms per cubic meter with an action level of 25 micrograms per cubic meter over an 8-hour work day. However, these rules were not put into effect until September 23, 2017, and that was only for the construction industry.

OSHA has been adding other industries in which the silica dust guidelines are being enforced, such as general and maritime industries (June 23, 2018).4 It has recently been discovered that hydraulic fracturing releases this dangerous carcinogen as well. Regulations enforced on the gas and oil industry will be effective June 23, 2021.4

Despite progress in recent years to protect workers exposed to respirable crystalline silica, there is still more work to be done. A recent study found that coal miners, especially in the Appalachian region, are developing silicosis, or “black lung disease” at an alarming rate.5 The OSHA rule released in 2016 did not cover the mining industry. While the mining industry does have their own guidelines in place, the OSHA guidelines are far stricter and allow a higher insurance of worker safety. Debates within the government surrounding what should be done about this epidemic are ongoing.